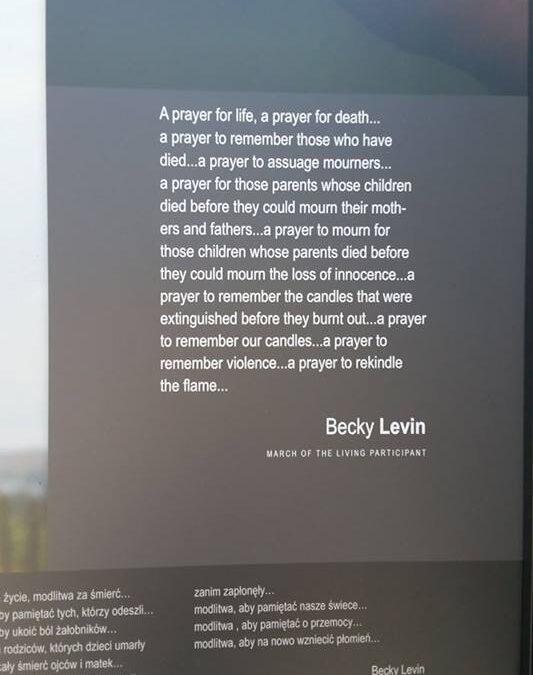 I suppose our history books are designed to summarize significant points that seem fundamentally more important.    My memory of learning about the holocaust was not dramatic.  Yes, I was aware of the gas chambers, the concentration camps, but I was not privy to the untold stories.  The reality was so horrid, inhumane and brutal that I could barely contain my outrage or my sadness.

As I walked into the first of three concentration camps, I was showered with intense emotion.  Maybe it was the two ton encased display of human hair – one was an intact braid – or quite possible the piles of luggage discarded after the owner was gassed.  Actually, the moment that forever impacted me was the realization that individuals with mental or physical disabilities were used as testers to see how much gas was needed to carry out the final solution.    We saw the gas chambers, the crematoriums, the rooms were they piled the bodies, and the death wall were they were lined up and shot.  This was an experience that profoundly affected the way I look at the world.

I began to stop trying to figure out how this could ever happen and focus instead on the helpers.  Those that risked their lives to save others from horrific deaths.  Because in every horrid situation, there is goodness.    It took me a better part of the trip to see it because my mind was so clouded with the darkness.

Taking Bryce on this trip was more than an educational excursion.  It provided a variety of teachable moments that a history book situated in a classroom could never provide.   I want him to know that the world can be cruel.  That even one person can make a difference.   That fear is the foundation for inhuman actions.  That every single breathing being matters.

I won’t forget what I saw.  I won’t forget the intense emotion that I felt as I walked in the footprints of millions who perished.   It wasn’t just the Jews.  There were gypsies, the handicapped……it was anyone that didn’t fit what the Nazis thought would fall into the category of the ideal German.    No one would have been safe it this would have continued.

While I usually steer clear of heavy topics in my blogs, I felt that nudge to share this.   One can’t understand the complexity and the calculated evil that transpired.   Sadly, it still happens.  The intolerance.  The cruel dismissal of someone that is different.  The insanity of believing that if we eliminate humans that make us fearful because of their core beliefs or the color of their skin is baffling to me.   I am still processing my experience and I am sure that it will take awhile to decompress.    I am looking for the goodness and the helpers whose light is brighter than the darkness.