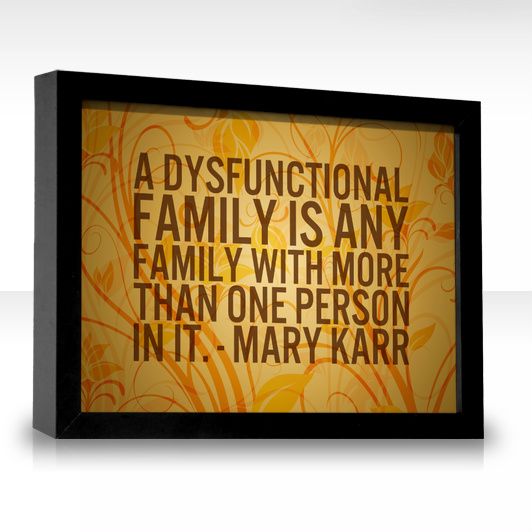 “We can’t have a family dinner because you aren’t going to be here.”   This is the reasoning my spouse gave me as they were dishing up their soup and headed to separate parts of the house while I prepared to go out with friends.   I laughed because the real reason was that they wanted to watch their own shows.

But, the same sentence was uttered last night.   While this is a light week for football practice since we are off Friday night, I still don’t know when Bryce would be getting home.  With that being said, the chili was ready and it would not be the first or the last time, we have eaten without him.    Brian insisted it wasn’t a family dinner if all four of us aren’t in attendance.   I insisted that we still are a family even with three.  We are still a family even with two.    He looked at me blankly.   He either really believes it or he just does this shit to annoy me.  Both are probable.

I delved further because like a dog with a bone, I can’t let it go.  “So, when Bryce goes away to school, we are no longer a family?”   Bailey chimes in, “So when I move out, you won’t be a family?”    Brian is seemingly amused and annoyed at the same time.  Because I am thinking that is the dumbest thing he has ever said.  Oh, wait, no…..there have been baseless words that have flowed from his lips before, this one was just baffling.

I pointed out that when he is out of town or staying late at work, the boys and I eat together because a family unit is not defined on the number in attendance.  It is defined by the connection of the ones present.  Wasn’t that profound?   This family dinner was not one of my favorites.  Bryce walked in as we were finishing allowing Brian to have it known that it was my idea to eat without him.   Honestly, our youngest looked unimpressed and was probably happy he entered on the tail end of this delightful conversation.

Even though it is a rarity that we all get to sit together and share a meal, I know that we are still a family unit.     The number in attendance is irrelevant and the ridiculous conversations will still emerge regardless of who is there.