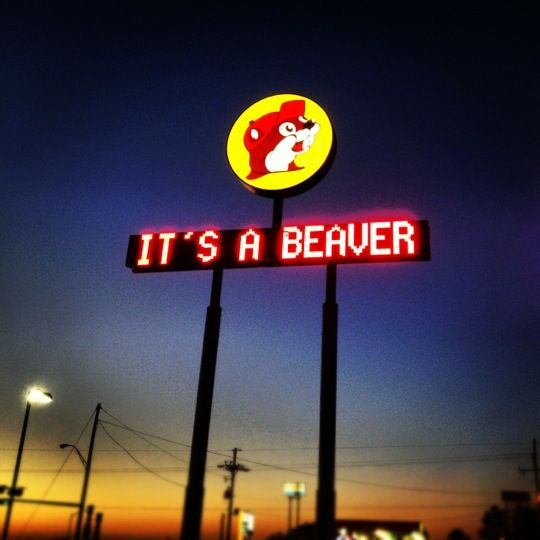 In my last blog, I promised to post my experience at a gas station. Okay, it isn’t just a gas station. It is the partnership of a Walmart and the State Fair that produced an illegitimate child named Buc-ee. This beaver opened up this cult gas station/over-the-top convenience store, called Buc-ee’s. Let me set the stage. My spouse could not wrap his head around the obsession that people had with this place. He scoffed. He rolled his eyes. He dismissed the concept that this place was worth the hype until he was a passenger in a vehicle that stopped at one. He was hooked. It seemed to be an addiction. So much so, that within 48 hours, he was back at one. He might need an intervention.

I was amused at his twisted connection to the beef jerky and the various kinds of pork rinds. He could not talk enough about the fudge. Did you notice he talked about it, but neglected to bring my any? Asshole. Anyway, I figured that was it. That is until we ventured to Charlotte, North Carolina, where a Buc-ee’s was on the way. Brian reminded me of Will Ferrell portraying Elf. He was so excited about my reaction. I reminded him to have realistic expectations.

It was 8:30 in the morning, which was ideal for me because there weren’t many people. We headed to the beef jerky display where the guy game Bailey all kinds of sample. They advertise their clean bathrooms and I will admit, it was impressive. We gathered our purchases – I bought my own fudge – and headed on our way. It was underwhelming. I mean, sure, it was fine but it didn’t constitute another visit.

What I wasn’t aware of is that my husband planned our need for gas would occur at Buc-ee’s. Sweet. Baby. Jesus. Fine. Both of my guys wanted a brisket sandwich, so I went along with crowd like a good cult member. However, by the time we got there, it was packed. I was hangry and my pain pill had worn off. (No, I am not abusing pain pills, but I will say, there aren’t enough narcotics to visit again. Actually, I had sinus surgery several days prior, so there was a need for relief.) Moving on. Both of my guys head to the bathroom as I stand in the middle of mass hysteria. People screaming at their loved ones to “grab the fudge” like there was going to be a shortage. It was like watching a live version of Hungry Hippo. It was as though none of these people have been in a store or seen food displays. Insanity would be the best word to describe it.

We select our sandwiches as the crazy lady (me) rants about everything I hate about this place. Brian was disappointed. Apparently, Mister anti-shopper wanted to take a Sunday stroll. Nope. Not on my watch. Besides, I think it is fair to say that if I had been in that hell hole one more minute, I would most likely be on the national news. We left with me still grumbling while eating the best chicken sandwich I have every had. Look, I will admit that some of their items are yummy, but it doesn’t mean I want a repeat performance.

Maybe I am an anomaly. When I have shared my experience, I am met with gasps of disbelief. It’s apparently against the law to bash this underwhelming place. All I can say is if you enjoy beef jerky to the point that it is in a large display case, need your nuts warmed, and have an obsession with beavers, then you have come to the right place.